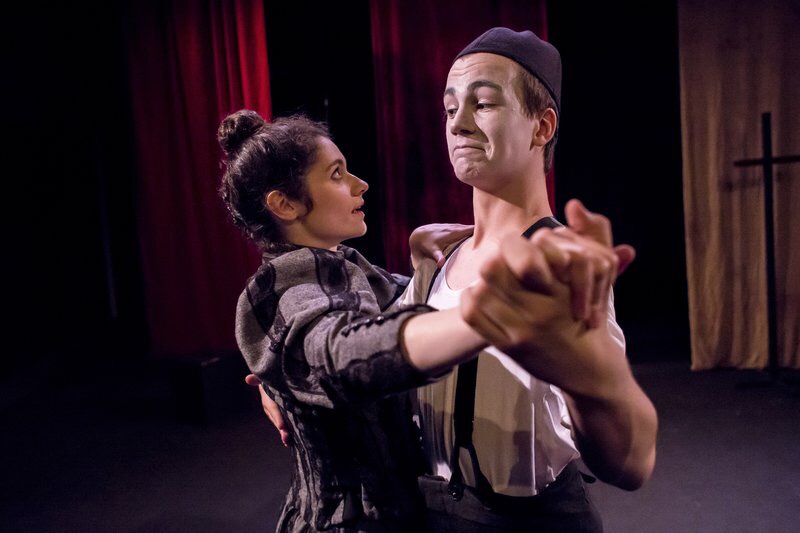 In the nineteenth century the concept of the Pierrot was one of a figure that could unlock the secrets of the unconscious. This in itself must have given the poet Albert Giraud a lot of scope for his set of fifty poems, written in 1884, to which Theatre Voliere has based it’s Pierrot Lunaire on thirteen. This production is a fusion of disciplines that includes mime, dance and song to name just a few!

From the stark and atmospheric staging of three pieces of black furniture, a vision of a gothic Victorian country house was brought to life as soon as the production began. The boy (Gabriel Wood) opened the piece playing a small red piano on the floor. A tension already in the air, his exasperated Governess dressed in sombre black and becoming increasingly frantic. Combining mainly contemporary dance with singing, Audery L’ Ebrellec portrayal of the fragile French Governess unhappy and homesick for her brother is beautifully acted, a vulnerability that seems to possess L’ Ebrellec in every graceful movement and every desperate song of pleading she performs in her role. Short mime passages with the boy were expressive as well as radiating a sense of sadness from both characters.

Jan Wood morphs flawlessly from the young brother who dreams of being a poet, intellectually gifted and full of promise to the Pierrot character with perhaps darker under tones. This transition represents the escapism for this once promising young man from his drug dependency, in to a figment of his sister’s imagination, that is also a sense of escapism for her as well. This transformation was intriguing, as it the lively characteristics of the poet’s former self were uploaded to the Pierrot character, this could be seen in every movement. The comical passage of a dance trying to take place between the mischievous Pierrot and his sister was touching as a bond could be felt between the two.

The darker side of this piece with the cruel father, the employer of the governess and father of the young boy is left to the imagination, but is something that would have been interesting as the audience to know more about, as is the mysterious painting of the boys, mother. This is the only fault of a production of this genre, a lot is open to interpretation, although in this case it works most wonderfully and is also one of it’s defining factors. 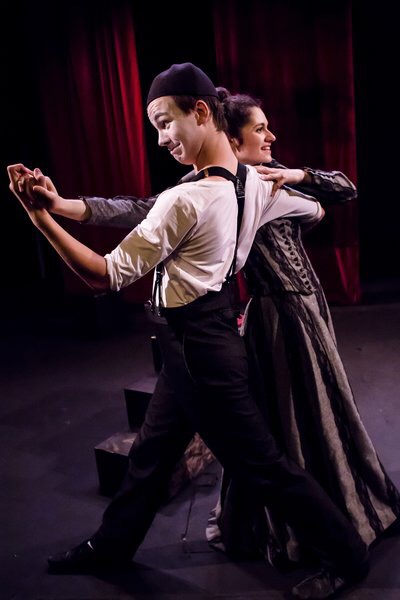 A revelation of this production was Gabriel Wood the young actor who was superb as the young boy left to his own devices by an obviously neglectful father, with the Governess as his surrogate mother. The playful and energetic nature of the young boy never waivers, his piano playing of five notes stands out as a genuinely chilling moment. The fear in this production is what is generated by the cast in a psychological aspect, rather than any real horror on the stage. The playful interaction of Pierrot and the sleeping boy near the end of the production, perhaps represents a child with his whole life in front of him versus the remains of someone who once did too.

Theatre Voliere have with Pierrot Lunaire, created a beautifully atmospheric piece that has some chilling but equally stunning choreography from Louis Bera and Jan Wood. This is a theatre company that is masterful at fusing the most expressive and enriching of every discipline and telling stories that unlock the imagination.