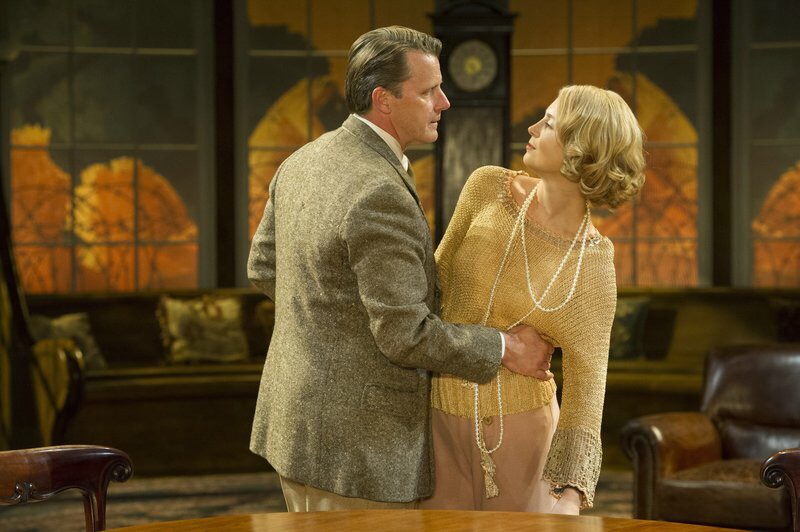 Written in 1932 by W.Somerset Maugham this story is based on the period following World War One. A tale of returning war heroes dealing with the consequences of conflict in a world that has changed forever.

Set in a beautiful drawing room, with views of rolling fields pierced by barbed wire a poignant reminder, of recent turmoil. The play opens with Gwen (Matilda Zieglar) patronising blinded Sydney (Joseph Kloska). It is evident from the outset that although it has been fifteen years since the end of the war, no one is sure on how to respond to the injured and surviving heroes and least of all class conscious Gwen. Lois (Yolanda Kettle) the frivolous younger sister who appears selfish and a temptress. Looking to escape her boring life with an aim to do anything to gain wealth and excitement. Enter Wilfred, Gwen’s husband (Anthony Calf) who can offer just what Lois is searching for and he falls into her trap nicely.

Collie (Nick Fletcher) honoured officer of the Royal Navy, in desperate need of finance to keep himself afloat from his failing business, embarrassingly asks Wilfred for a loan who immediately declines.This has catastrophic reprocussions for all involved. Nervous sister Eva (Justine Mitchell) whose fiancé died in the war has fallen in love with Collie. Is it that, or is she just looking to escape the fact that being unmarried the responsibility falls on her shoulders to look after the household and her invalid brother? Ethel (Jo Herbert) is pitifully unhappy with her marriage to drinker war veteran Howard (Sam Callis). The tenant farmer, the only person who felt the war gave him the stability and money he craved and who also lusts after Lois. Mother (Stella Gonet) try’s to keep the family together, whilst we discover that her doctor brother (David Annen) diagnoses a terminal illness. Lastly Father (Simon Chandler) is completely oblivious to this disfunctionality and is your archetypal “stiff upper lip” head of the family.

You will now be thinking that there cannot be any lightness in this deeply intense engrossing show however you’d be wrong. There are instances of wittiness that made us chuckle. One such interaction between Lois (Yolanda Kettle) and Howard (Sam Callis) when he forcibly kissed her and she pushed him away saying “You stink of cows” to which he replied shrugging his shoulders  “well some girls like that”

This is an ensemble cast piece with each actor providing us with an equally strong performance. The attention to detail is outstanding with the sound effects, props and staging. Director Howard Davies and Designer William Dudley have really excelled in this production.

The show illustrates how war has such a lasting effect. The despair, depression and depravity it leaves us with is phenomenal. Such is its far reaching consequences in peacetime and the cast demonstrates this perfectly here. I have not read the book, neither have I seen this performed before, which testifies to the strength of the characterisation and portrayal by this tremendously talented cast.